COLLEGE OF SOCIAL AND BEHAVIORAL SCIENCE

AT THE UNIVERSITY OF UTAH 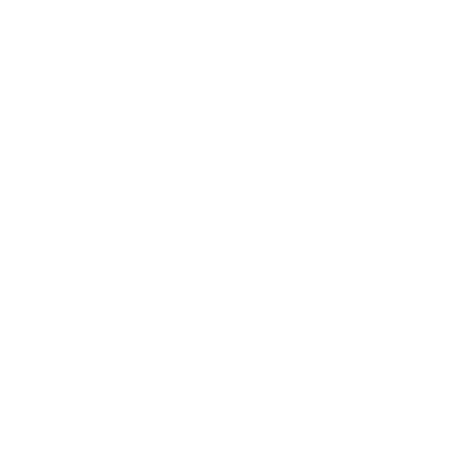 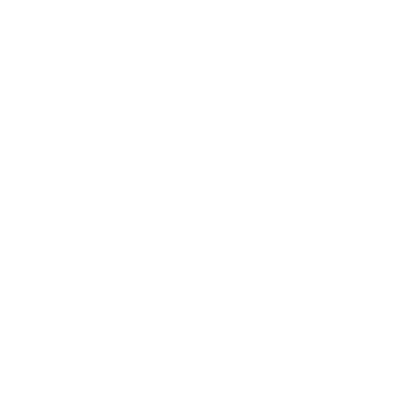 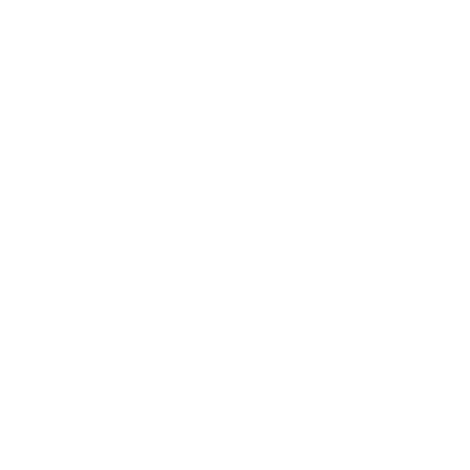 We are focused on creating a social science way of thinking about critical challenges that all of us face in the social and natural world. Our award-winning faculty and students study a wide range of issues including climate and sustainability, social and economic inequality, immigration policies, cultural extinction, technology and society, international security, global trade, early learning and child development, health and well-being, and the roles of gender and ethnicity in society.

The Solutions Scholars program admits a cohort of approximately 20 students each fall. These scholars are committed to addressing key challenges facing our world like immigration, inequities facing women, climate change, poverty, human rights, the obesity crisis and more. Each Solutions Scholar is supported with a $4,000 scholarship disbursed over two years.

CSBS has its own dedicated internship coordinator who works with students to identify internships suited to personal preferences and interests or program requirements. Considered an integral factor in preparing students to be competitive upon entering the job market, over 386 internships were completed by CSBS students during the 2019 academic year.

CSBS hosts an annual Student Research Day each spring, where participating students can present their original research projects to a panel of faculty judges. Whether showcasing lab research or research that is community-focused, Student Research Day is an opportunity to learn and connect with faculty mentors. Visit our CSBS Research page to view opportunities for each CSBS major.

Anthropology is the study of human beings; their cultures, biology, behaviors, and their changes through time (evolution).

Because we study all aspects of humans, anthropology is said to be holistic and inter-disciplinary, where anthropologists work hand-in-hand with other sciences such as biology, physiology, sociology and psychology.

A degree in anthropology prepares you for advanced degrees in:

Criminology is the study of crime, deviant behavior, social control and the law. Through exploration of theoretical and applied social science research, students learn about crime as a social phenomenon.

This exploration includes empirical research on crime and criminal behavior, the tools and methods used to study and prevent crime, issues relating to criminal law, offenders, victims and victims’ rights and the agencies involved in the processing and sanctioning of juvenile and adult offenders.

Policies surrounding crime and criminal justice that affect individuals, families, and communities are implemented on a daily basis. Crime, and our response to it, continues to be a major issue with far reaching impacts. A major in criminology prepares students to deal with these critical issues.

Our world is shaped in a fundamental way by economic forces. High unemployment, financial uncertainty, and growing public debt present great challenges for all of us. Concerns about energy sources and about the environmental impact of economic activity continually impact the world. Studying economics allows you to understand these challenges more deeply and gives you tools to help solve economic and real-world problems.

Economists study where people produce and distribute goods and services and focus on issues related to decision-making in governments, social and economic institutions, firms and industries. Students majoring in economics gain critical thinking and quantitative analysis skills to impact the world and affect positive change in a wide array of circumstances and organizations.

Economics majors earn higher starting salaries than students who major in any other social science field. Potential careers include:

Environmental and Sustainability Studies focuses on understanding ecological systems and the consequences of human-environment interactions.

This major stresses the importance of social responsibility, leadership, and a science-based focus on solutions and integrated problem solving, with a curriculum rooted in interdisciplinary approaches from earth systems science, humanities, and social and behavioral sciences. The program provides students with a broad multi-methods education that emphasizes systemic analysis, peer learning, and community engagement.

Students learn how to shape more resilient and sustainable systems, emphasizing the interaction between society, the economy, and the environment and develop skills to:

Student Experiences at The U

Department of Environmental and Sustainability Studies 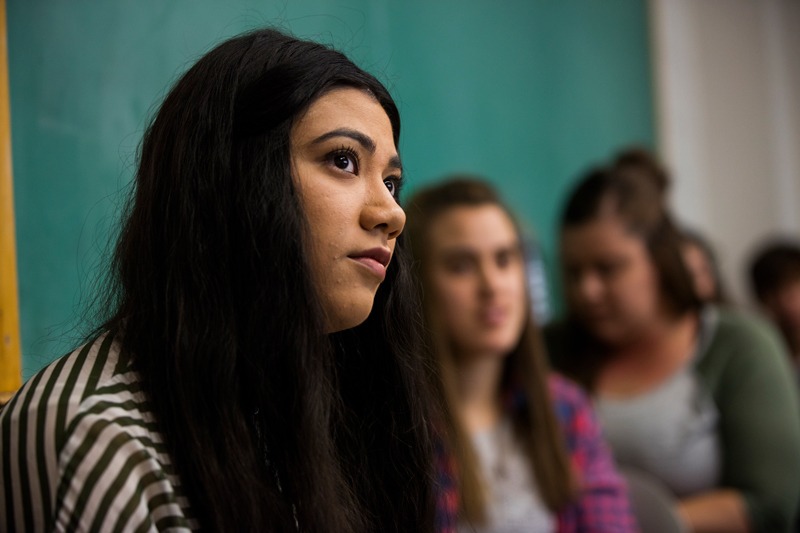 The Family, Community and Human Development (FCHD) major provides students with an in-depth understanding of the processes of personal development in the context of the family, and community and societal forces impact beyond the family.

Students majoring in FCHD acquire an understanding of:

In addition, our department offers students three opportunities for diving more deeply into specific areas of focus that are both relevant to the broader goals of our major and oriented toward specific career opportunities. These include:

Geography at the U incorporates the “No Student Left Inside” initiative that encourages field work and labs to get technical, real world experiences.

The Health, Society and Policy (HSP) majors learn that human health is determined not only by things like pathogens, illness, and genetics, but also by lifestyle and behavioral choices, environmental exposures, socioeconomic resources, and cultural affiliation. HSP students learn how institutional levels of influence, such as public policy and access to health care, affect health outcomes and create disparities across the globe and within subgroups of the population.

The HSP program is an interdisciplinary undergraduate degree (BA or BS) that provides students select coursework from a number of different departments with a focus on guiding students toward an understanding of the multidimensional character of human health. HSP Introduction and Capstone courses provide a signature and unifying experience for all HSP students.

Health, Society and Policy students can find work in a number of fields:

Political Science studies the world of politics and government – particularly the manner in which people organize, administer, and seek to improve their governments, the privileges and responsibilities of citizenship, and the use and abuses of power.

Political Science majors explore how laws and policies affect peoples’ lives, community engagement, and social change. Through a critical investigation of the political world, political science students grapple with some of the most pressing challenges facing societies around the globe.

All students majoring in political science acquire an understanding of:

Psychologists study human and animal behavior, seeking to understand how people and nonhuman animals function in their environments, ultimately seeking to understand, predict, and resolve behavioral and psychological problems in an effort to help people achieve and maintain mental health.

Curriculum includes coursework in psychology as a science and profession, cognition and behavior neuroscience, intergroup relations, development in infancy, emotions, human performance, personality, sexuality, and health to provide a solid knowledge base and critical thinking skills needed for success.

Psychology students graduate with an array of transferrable skills in communication, teamwork, critical thinking, writing, and problem solving, which will equip graduates for a number of careers.

Sociology is the study of how human behavior shapes and is shaped by larger cultural and social contexts. At the U, we offer a versatile Sociology major that introduces you to a variety of social issues and processes and enables you to connect with other departments and the community. This program covers a variety of domains including deviance, criminology, and the law; globalization, environment, and politics; population and health; and diversity and inequality. This means you have the opportunity to take classes based on your interests, passions, and goals. Whether you're passionate about criminal justice reform, involved in sustainability and other worldwide issues, invested in important public health issues, or committed to pursuing equity across diverse populations, Sociology at the U has something for you.

With these well-rounded studies, you will learn how to be a critical observer, participant, and actor in the social world. You will develop the skills you need to analyze, understand, and explain important matters in your personal life, your communities, and the world. 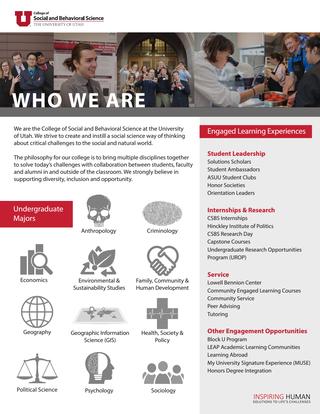 Get Involved with CSBS 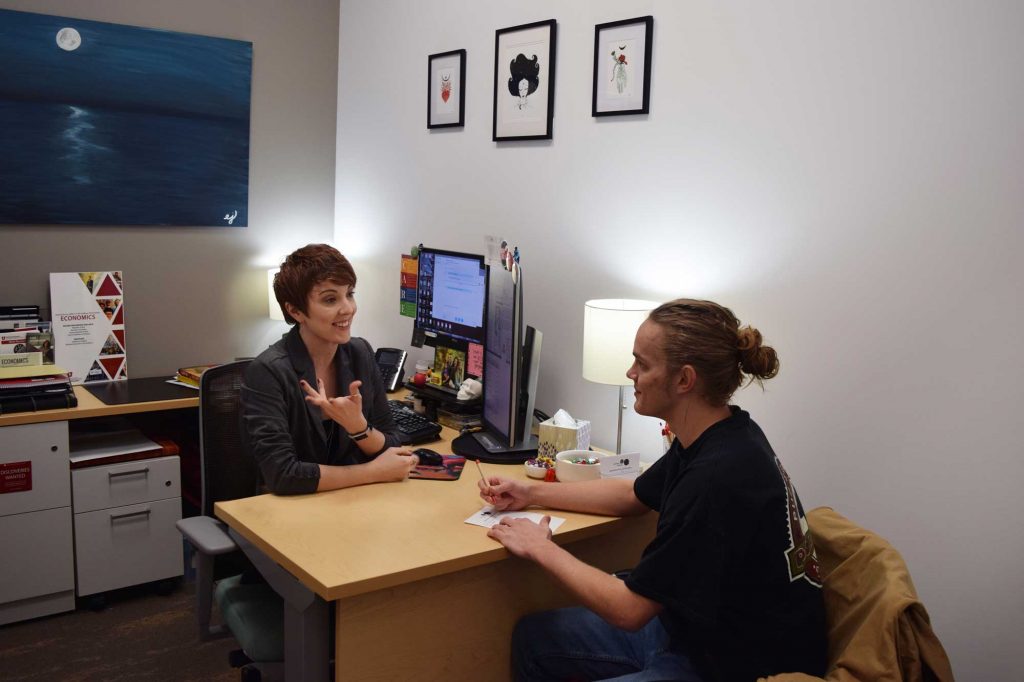 CSBS has a number of advisors to assist you on your academic journey.

CSBS has a number of advisors to assist you on your academic journey.

Follow us on social media for an inside look into campus!